The Story of the Shinjuku Golden Gai: Then and Now

The Golden Gai is a pub district in the Kabukichō entertainment district of Shinjuku, Tōkyō. A small district of ​​around 6600m², filled with low, narrow row houses made of wood, the golden gai is packed with over 280 small bars and eateries. In the old days, there were literary pubs (bundan-bar) and other unique pubs which attracted numerous writers, editors, film directors, actors and cultural figures who then became regular clients. This kind of clientele formed one of the origins of Tōkyō`s subculture and underground arts.

In the late 1980s, during the heyday of the financial bubble, the district was faced with real estate sharks who forcibly bought up land in order to displace their owners and sell the land at exorbitant prices. However, the bar owners banded together and founded the “Association to Protect the Shinjuku Hanazono Golden Gai” as an alliance against the evasive business of real estate agents and to protest against redevelopment plans for the district. At the beginning of the 90s, with the collapse of the bubble economy, the machinations of brokers also came to a standstill. The pubs, however, which had to bow to pressure from property purchases were forced to close their businesses leaving numerous properties empty and deserted, which meant that during this period, customers disappeared and the district resembled a ghost town.

However, the two associations were committed to the revitalization and development of the infrastructure of the area, which led to a revival of the city at the beginning of the year 2000 due to the openings of many new bars led by young bar owners. Gradually, clients came back to the pubs and with them, the area regained its liveliness. The district is now known even beyond Japan’s borders and has been attracting tourists from Europe, America and many other parts of the world. The neighborhood is now administered by the Shinjuku Golden Gai Shopping District Promotion Association and the Shinjuku Sankō Shopping District Promotion Association. Therefore, the alleys within the district are considered private paths, which is why approval must be obtained from the relevant administration for photos or video recordings.

The origin of the Shinjuku Golden Gai lies in the black market, which arose in the chaos after the end of the Pacific War.

On the east side of the Shinjuku train station, the Shinjuku Market was spread out – a black market that was under the administration of the Yakuza. With time, pubs in the form of stalls started to increase, becoming the main activity of the area.

In 1949 the abolition of the black market was decided by order by the commander-in-chief for the Allied Powers and consequently the prefecture administration of Tōkyō ordered a change of location until the following year, together with the capital city council. As an alternative, the stores in the black market relocated near the Kabukichō entertainment district in the Sankōchō district.

The period of the “blue line”

Sankōchō was located away from the train station and the center of Kabukichō. Almost all of the shops in this area, formerly called Yoromeki-Yokochō, were quietly carrying out prostitution under the guise of a pub. These unlicensed bogus shops were colloquially called the “blue line” because they were marked in blue color on police road maps. Around the Kabukichō district there were numerous other “blue” corners, making it one of the largest areas known for prostitution throughout Tōkyō.

However, when the anti-prostitution law was passed in 1958, all businesses that engaged in illegal prostitution were forced to go out of business.

Originally only the alleys G1-Dōri and G2-Dōri were officially referred to as the Golden Gai. However, as the name gained popularity throughout Japan, the entire area including the other alleys is now known as Shinjuku Golden Gai.

The city of artists

After the enforcement of the anti-prostitution law in 1958, the area was transformed into a city with numerous pubs and bars.

In 1960, certain alleys in the district were divided up by the administrative associations and delimited as sub-districts Golden Gai and Hanazono Gai.

In the 60s and early 70s, which were a highly political time in Japan, the bars of the Shinjuku Golden Gai and the Hanazono Gai were roughly divided into three categories: the literary bars (bundan bar), gay bars (especially bars with men dressed in women’s clothing) and cutthroat bars (bottakuri bars, in which the drink prices are unclear, where clients are often arbitrarily charged and are ripped off).

With a small space of ​​just 10 to 15 m², the bars were so narrow that with a few guests at the counter, the bar’s capacity was at a maximum. More and more literary pubs opened, where writers, journalists, editors and film directors held heated debates and arguments, thus developing a lively center of Shinjuku`s culture.

In 1976 the writer Kenji Nakagami received the 74th Akutagawa Literature Prize and Ryūzō Saki the 74th Naoki Literature Prize. Both were regulars at Shinjuku Golden Gai, which is why the area became known nationwide as a gathering place for cultural workers and artists thanks to the coverage in the media. It was even said that, “Is it essential for anyone who considers themselves as an artist to have their go-to pub in the Golden Gai”. Not only was it popular for figures in the literature industry, but also film and theater directors, actors and models who came to appreciate the Golden Gai and became regular clients. This is also linked to the rise of the film production company Art Theater Guild (ATG) and the boom in underground theater, which flourished the Shinjuku culture even more.

In the 1980s, due to the financial bubble, urban redevelopment projects started to spill over Shinjuku Golden Gai. Real estate sharks manipulated property prices in the dark and the Shinjuku Golden Gai neighborhood was faced with violent purchases of land. Owners of bars began to fight against the land acquisition which soon worsened the situation between the owners and the realtors. In 1986 there was an increasing number of alleged arsons, which led the bar owners, out of a growing sense of crisis, to join together in creating the “Association for the Protection of the Shinjuku · Hanazono Golden Gai” and began to protest against the violent property purchases and the redevelopment plans of their district. Celebrities designed T-shirts to raise activity funds, and through consulting lawyers, the protest carried on in an honest and decent manner. At the end of the year, a festival for traditional rice pounding was held, publicly showing that the “Shinjuku Golden Gai is doing well”. As a devastating consequence, the owner of the bar, who was also the chairman of the association, was repeatedly the victim of alleged arson.

After the collapse of the financial bubble, the real estate sharks stopped their business, but on the other hand, pubs that were driven out due to the pressure from brokers were left neglected. The economy declined, and with bars now empty, the quarter resembled a ghost town.

With the passing of the new tenant’s law in 1992 and a large-scale construction in infrastructure, agreements between new, young tenants looking for property and owners gradually came about, and gradually Shinjuku Golden Gai was reborn again.

Today the district, which is even listed in the Michelin Green Guide, receives great attention within Japan and overseas as a rare pub district with unique pubs, and where the special reminiscent flair of the Shōwa era has been preserved.

A fire broke out on April 12, 2016, in which it was reported that a total of up to 300 m2 of space was destroyed. Upon promising discussions with the owner, the administrative associations of the Golden Gai and the district administration, all pubs and restaurants were restored in its original form and have been able to maintain their businesses without any change. Since 2017, a total of five associations have been committed to the preservation of the district and disaster control. 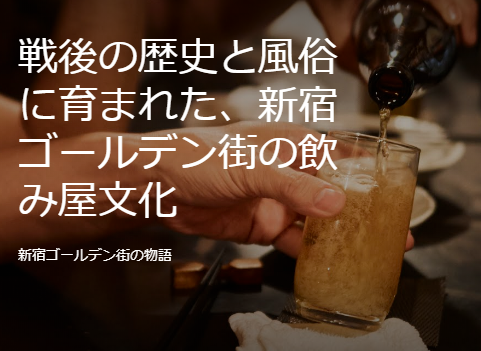